I am by no means old, but when I started my apprenticeship working on The Western Farmer & Grazier, the technology we were using wasn’t quite so technical. So while many of the old marketing rules still apply – because we are essentially still the same people – the way we do things has changed a lot.

Since talking to a great teacher I had in grade 5 primary school, I’d been dreaming about going to uni, getting a cadetship and becoming a foreign correspondent. But by the time year 11 came around I was beginning to struggle with the number of tough subjects I’d chosen and extra activities I was doing to help me achieve my goals.

One of these activities was working on the school yearbook where I submitted an awesome article about the human side of our school principal which included a top photo of him swinging wildly on a tyre swing dressed in his tracksuit after he’d spent the night at our art camp. Even though the article didn’t make it to print, it did get me noticed and recommended for an apprenticeship that was going at the company printing our yearbooks, Statewide Publishing.

While Statewide Publishing looked after the artwork for a lot of little magazines, local business stationery and many CBD menus, they also shared a building with The Western Farmer & Grazier and Elders Weekly, separated only by the fax and telex room. (Anyone who remembers the telex machine would understand that when it roared to life it was so noisy that it really did need its own room). This meant I was side by side with journos and ad execs, working until all hours of the night to get the paper out every week. 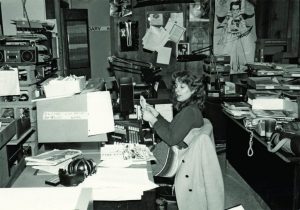 Some of the journos would type up their stories on those big old typewriters we learnt on in school, ripping the thin yellow paper out of the rollers with a big wave of their arm, stubbing out their cigarette that would have been perched on their lip during the creative process, attaching a couple of photos with red size and crop marks drawn on them, and popping it in the typesetters pigeon-hole ready for the next edition. Other journos who couldn’t get back to the office in time for the next edition would ring through their story, dictating it directly to one of the typesetters.

The typesetting ladies sat at old clickity-clack computers of tiny dark screens and bright green text, overflowing ashtray and empty coffee cups beside each terminal. And no matter how busy they were, the click-clacking of old computer keyboards never slowed, and the gossip always flowed.

Our proofreader  – a fabulous french Canadian lady with a cigarette husky voice – had her own quiet little corner of the building where she would read everything the ladies printed, checking for typos on the galleys of text, sending it back for correction with big red marks before it made it to our bench.

My main role in those 4 years was working on a long trestle style bench, along with the other compositors, cutting and pasting columns of text into the newspaper layout as drawn up by the editor. As I started to show more talent for drawing and design, I was promoted up to my very own light table – of which there were only 2 – and entrusted to draw special request images if we couldn’t find what was needed in the clipart folder, and design and put together the individual adverts.

We had one compositor who was our car advert specialist. He would route out those car images with his surgical scalpel with such precision, getting perfectly rounded car tyres every time, and overlaying the shiny car lettraset sparkle star in just the right spot so the full page of cars for sale had that perfect look of uniform and casual about it.

In a separate office up the front of our building, we had a couple of “University trained” graphic artists. They had sheets and sheets of fancy lettraset, paintbrushes, special ink pens and even an airbrush machine. I would look in awe at the poster designs that came out of that room and wonder if I would need to go to university to become as talented as them.

But soon realised that I didn’t have to go to university to learn and to grow. All I needed was a willingness to try new things, and learn from my more experienced colleagues. After I completed my apprenticeship, I moved on to work in a large printing company where we did most of the printing for the Perth Royal Show and then for an Internet Provider who was willing to let me “learn on the job” – because the internet was this new thing that was going to revolutionise the way people do business.

It really was a different world back then, and how technology has changed.

Note: Not everything you read on the internet is accurate. While I make every effort to check my facts and stats, this article is base on my opinions from over 30 years in the printing, marketing and advertising industry.